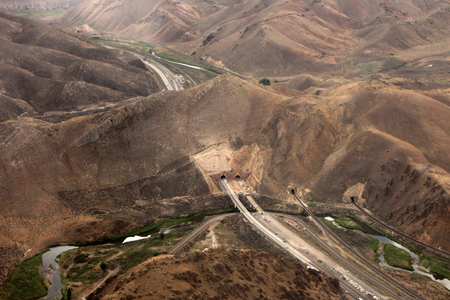 From NDOT: I-80 Carlin Tunnels Lighting System to Be Featured on Discovery Channel

CARSON CITY, Nev. – The innovative lighting system which reduces energy use and improves traveler safety in the Interstate 80 Carlin Tunnels will be featured on the Discovery Channel this Friday, June 17 at 7:30 am.

The Innovations with Ed Begley, Jr. show will feature the tunnels’ state-of-the-art lighting system which the Nevada Department of Transportation installed in 2014 as part of the Carlin Tunnels Improvement Project. The first such system to be used in a freeway tunnel in North America, the lighting system automatically and gradually dims or brightens lighting to match outside lighting conditions, instead of maintaining one consistent light level in the day and night. By more closely matching the outside light, the lighting system makes it easier for drivers’ eyes to adjust while traveling in the tunnel, ultimately improving driver visibility and safety.

Using 774 LED luminaires, as opposed to the previous 1,219 high pressure sodium luminaires, the system is also much more environmentally and budget friendly. Over the next 20 years, the lighting system is anticipated to save more than 9 million dollars in maintenance and replacement costs.

Completed in October 2014, NDOT’s Carlin Tunnels Improvement project revitalized nearly three miles of I-80 through the Carlin Canyon. The roadbed leading up to and through the Carlin Tunnels was reconstructed, including enhanced roadway drainage and new concrete pavement near the tunnel entrances. Tunnel lighting was renovated with an innovative LED tunnel lighting system to improve driver visibility by gradually dimming or brightening lighting to match outside conditions.  The project also enhanced and retrofitted eight bridges and improved intelligent transportation systems such as tunnel monitoring cameras and ice warning system.