The first phase of NDOT’s Lake Tahoe Clarity Challenge projects along the North Shore of Lake Tahoe began in 2011, and at the time was the only portion of the project that had been awarded. It entailed the installation of a new filtration and catch basin system on a 3-mile section of State Route 28 (SR28). SR 28 is a two-lane road that is part of a network of highways that encircles Lake Tahoe. The only available detour for this section of roadway would add one hour to traveler’s journeys.

Contractually limited to a schedule of Monday at 7 am through Friday at noon and, to comply with tourism constraints, working only in the months of May, June, September and part of October, very little progress was made in the first building season. Typically, this is seen as part of the work, a necessity and constraint that a project which might ordinarily take one season could take many more in order to protect the lake and tourism. Completion was projected for 2015, five years beyond the start date.

Never an organization that accepts status quo, Q&D, who had since won a second subsequent phase of NDOT’s clarity improvement construction, put into effect their typical seasonal-constraint construction approach – “What if we get this done much faster, better, and get the heck out of here?” Through research of past projects and potential exemptions, Q&D found no leeway in the regulations for the project. Because of the connectivity of the phases of the project, the two erosion control phases, each stretching over 5 miles, could not be done concurrently without backing up the entire north shore access to the lake. The only avenue left to alleviate the congestion while still protecting Lake Tahoe was to get public buy-in for a new approach to the schedule.

Through public meetings and communication with the business community, the project team obtained approval of a 24-hour work shift in the months of May through October. Q&D cut two weeks from the completion of the roundabout through the use of a new technology suggested by NDOT that allowed the stamped barrier rail to be placed with a slip-form paver as opposed to hand-setting. NDOT also approved a proposal from Q&D to re-phase the traffic control plans for the roundabout phase of the project, again cutting weeks from the schedule.

“[T]hese projects presented a tremendous challenge in regards to limiting impacts to the traveling public, residents and visitors as well as challenging construction activities. The collective efforts of the entire team generated a variety of unique and effective means and methods which were implemented to exceed the Department’s expectations. The 3 years of construction time saved is of great benefit to the department no only because it makes our construction crew available to administer other contracts; it also showcases to all of the stakeholders, taxpayers and traveling public that the partnering efforts between the Department and Q&D provided a positive benefit and highly desirable outcome.” 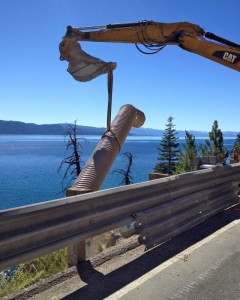 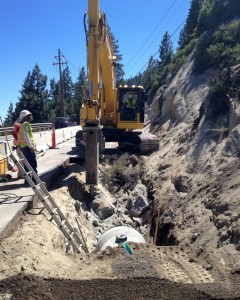 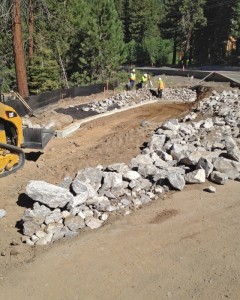